A Small Update on Shtakamashkan

After my last research-fest, I decided to start in on something a little lighter. Mapping Shtakamashkan, homeworld of the Skavoon. I had made an abortive attempt earlier, but started off by making some fairly serious errors that resulted in me starting over.

This is where it all began...

Not all that exciting, maybe, but I had been wanting to work on a pole-centered supercontinent and this certainly fit the bill. Good thing about noise-generated maps is they can spur creativity and get you out of mental ruts. The bad news, besides all the other silliness I’ve been over before like central mountains and such, is that it can take awhile to find a decent approximation of what you want if you have something specific in mind. I found this, it fit my parameters well, and I got permission to use it. Yay, me!

I’m not going to use the actual image for much. First thing I do is use this equal are projection to figure out what my planets hydrospheric fraction is. That’s the portion of the planets surface covered by water. First, I use Photoshop’s magic wand to select the white area at the top or north end of the map. I didn’t use the contiguous option for the magic wand, so I need to use the rectangular marquee with the alt/option-key down to deselect the southern hemisphere ice.

Next, I adapt part of Mike Summers’ method for Adding Realistic Coastlines to a Map. There’s a lot more to his method, I just found his use of the contiguous option on the magic wand tool to be a godsend for eliminating the weird lakes and inland seas formed by most fractal generators. So I used magic wand with, “contiguous,” checked and with the shift-key down to add the open water to the already selected sea-ice selection. This will be the area of the ocean. Well, almost. The trouble with the contiguous selection is that it will leave all sorts of open water that was surrounded by sea-ice unselected. This is well away from the land, though, so, in reverse of the southern ice cap, simply use the rectangular marquee with shift-key down to select those areas.

I now have a very clean selection of the ocean coverage of this world. I look at the histogram for this selection. If the little yellow warning triangle with the exclamation mark shows in the upper right-hand corner of the histogram graph, simply click on it to update the calculation. Look down at the number labeled, “Pixels:,” this is the number of pixels selected. In this case it’s 1,045,154. I’ll record that. Next, I will select the entire image(command/control-A or Select>All on the menu), update the histogram if necessary and record the number of pixels representing the entire image. Or I multiply the width of the image by the height. Whichever. In this case that comes to 1,570,000 pixels. Not surprising, ’cause it’s a 1570×1000 image. The pixels of water divided by the total pixels gives the hydrosphere fraction of this world: 0.6657 or 66.5% ocean. If this world were the size of the Earth(I think it’s bigger) the total land area would be 170,500,000 square kilometers, the big continent, alone, would be 168,400,000 square kilometers. That’s about 17,900,000 square kilometers more than the land area of the Earth. About an extra South America! All in one big continent. I foresee big deserts.

The oceans of Shtakamashkan in white on black land.

I decided I also wanted a mask of ice areas. Since I didn’t need that mask to differentiate between hemispheres, and since I didn’t mind the fractal breakup around for the edges for this purpose, I didn’t bother with any cleaning. It’s not worth too much effort, especially ’cause I’m not sure that I’m going to use the ice pattern as-is. I unchecked the contiguous box, and clicked on a patch of white at the top of the screen. Thus I had my selection all saved up.

Maybe the ice-covered areas of Shtakamashkan

I like equal area projections as much as the next guy, but, even with Flexify, converting cylindrical equal-area to other projections has some problems. These aren’t problems that will effect my masks, but if I try to use cylindrical equal-area as the source projection on my height-fields, it will flatten out the poles, so we need to convert to the generally useful and familiar equirectangular or plate carée projection early.

Now that I have my area, I can use Flaming Pear’s Flexify filter to reproject the masks.

Some thought is in order at this point. I’m reprojecting, anyway, to make up for the funky projection of the original. The easiest area to edit for most projections is near the center. Perhaps I should rotate the projection so that the big continent is centered. Then, when I’m done editing, I can just rotate it back again.

Now, at the moment, I’m only interested in two masks. For each of those masks, I will go the following procedure.

a) Open the mask image.

c)In Flexify, set the Latitude slider to -90. Just jack ‘er all the way to the left. This is because our area of interest is centered on the south pole. If it had been centered on the north pole, we would have set that to +90. For anything else, we would have set Latitude and Longitude to the latitude and longitude of our desired center. Fixing it back again, later, gets more complicated, and I’m not dealing with that right now! We’ll leave it as an exercise for the reader to figure out what Spin does… 😉

e)Set Output to, “equi tall.” This is necessary because we want to fill the canvas with our image and the, “equirectangular,” output is forced to an aspect ratio twice as wide as it is tall. Press OK.

f)Open Image>Image size… Set Width to twice the value shown in Height. In this case 2000 pixels. I don’t want to lose any data yet, but I want a fairly minimal resolution. In later stages high resolution costs time.

g)Make sure, “Constrain Proportions,” is checked.

h)Also make sure that, “Resample Image,” is checked. Set the resampling pull-down to, “Bicubic.” Press OK. 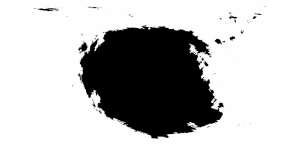 Black is land, white is water.

White is ice. Black is the absence thereof.

An illustrative image to show how all these things go together.

For the next part I will move on to Wilbur for detailing.

5 Responses to A Small Update on Shtakamashkan